“Gramaglia is clearly the star, and his playing is hard to fault — intonation as well as interpretation.  Violists will want this one […]” American  Record  Guide,  July/ August 2015

A versatile instrumentalist and an intellectually curious artist, Simone Gramaglia is considered one of the finest violists of his generation. He combines his passion for music, philosophy and literature with an intense activity as a musician (both in chamber music and as a soloist), as a teacher and as an artistic director. His teachers were L. Brusini, B. Giuranna and M. Kugel. His studies with Piero Farulli and H. Beyerle were fundamental to his education in the art of chamber music.
He began studying the viola at the age of 16, after having previously studied the piano and recorder. He earned his diploma six years later, and immediately embarked on an international concert career.
As a founder member of the Quartetto di Cremona, founded in 2000, Gramaglia is passionately dedicated to chamber music and collaborates with numerous artists including Antonio Meneses, Lawrence Dutton, Jamie Walton, Eckart Runge, Giovanni Sollima, David Orlowsky, the Pavel Haas String Quartet and the Emerson String Quartet, and performs in the most prestigious concert halls in the world (among others, Lincoln Center in New York, the Konzerthaus in Berlin, Wigmore Hall in London, the Concertgebouw in Amsterdam, Santa Cecilia, NCPA Beijing, the Salle Gaveau in Paris, and the Teatro Colon in Buenos Aires). Since 2012 he has performed in a duo with guitarist Luigi Attademo, with whom he recently recorded an album dedicated to the works of Niccolò Paganini, which was very well received by critics. It included Gramaglia’s own transcriptions of the six op. 2 sonatas, the famous Sonata Concertata and the original version of the Sonata per la Gran Viola, which he has also performed with numerous orchestras. His chamber and solo repertoire ranges from Bach to the twentieth century, with a particular focus on the contemporary music of today. He has recorded for the Decca, Audite (Echo Prize 2017, ICMA 2018) and Brilliant record labels, both as a soloist and with the Quartetto di Cremona.
His performances are regularly broadcast on major radio stations around the world (ABC, BBC, Rai Radio 3, Deutschland Radio, WQXR New York). He is a member of the faculty of the string quartet program at the Accademia Walter Stauffer in Cremona, as well as the viola and string quartet teacher at Music With Masters, a summer masterclass of which he is the founder and artistic director. He is regularly invited to hold master classes across the globe. In addition to his teaching activities, he is intensely dedicated to supporting young musicians, in particular young string quartets, string trios and piano quartet and trios, through the international initiative Le Dimore del Quartetto. He serves as artistic director of the project and has selected over seventy young ensembles from all over the world as participants.
He is the artistic director of Italy’s Concorso Nazionale per Quartetto d’Archi “Sergio Dragoni,” the first edition of which was held in May 2019. He is regularly invited to sit on the juries of international string quartet and chamber music competitions (including the Premio Paolo Borciani and the Concorso Gianni Bergamo). He has also served as a member of the faculty at the Niccolò Paganini
Conservatory of Music in Genoa, Italy. He plays a viola by G. Torazzi from circa 1680, generously made available to him by the Kulturfonds Peter Eckes (Germany). He was the first Italian violist to play the Stradivarius “Paganini” viola for a prolonged period, kindly loaned to him by the Nippon Music Foundation (Tokyo).
He writes the column L’Angolo del Quartetto (Quartet Corner) for Archi magazine. 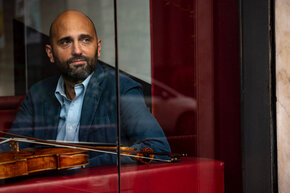