Ingolf  Wunder, born in Austria in 1985, started his musical adventure on the violin at the age of 4. Never pushed by his parents, he treated the violin as a hobby.
At around 14 years of age, a teacher from Linz, H. Mattheus, coincidentally discovered his talent for  the piano. After 10 years, Wunder gave up the violin, left Klagenfurt and began intensive piano studies at the Music Conservatory Linz, under Prof. Mattheus.
A few months later Wunder participated in his first youth competition and won the 1st Prize (VII Concorso Internazionale di Musica, Cortemillia). Soon after came the 1st Prizes at the XVI European Music Competition (Torino), the 63rd Steinway Piano Competition (Hamburg) and a few more.
About one year after changing the instrument he made his debut at the Vienna Konzerthaus.
Wunder continued his piano studies at the Vienna University of Music and Performing Arts.
In 2008 Wunder started his collaboration with the Polish pianist Adam Harasiewicz. A year later he  decided to take part in a piano competition for the very last time.
The 2010 International Chopin Piano Competition in Warsaw brought uproar, recognition, the  2nd Prize, a few special prizes and many devoted listeners around the world.
Next to playing concerts and touring, he undertook conducting studies to widen his musical horizons. He obtained his diploma at the end of 2012.
He has recorded 4 CDs for Deutsche Grammophon and has been performing in Europe, Asia and  both Americas, including such prestigious halls as Musikverein Vienna, Berlin Philharmonie, Queen  Elizabeth Hall  (London), Sala Verdi (Milan), Tonhalle Zurich, Rudolfinum (Prague), Mariinsky Theater (St. Petersburg), Suntory Hall (Tokyo) etc.
Recently, Ingolf  Wunder and his wife launched APPASSIO.com – a platform exclusively for art education: live online lessons. It’s dedicated to teachers, students and art lovers. It aims at helping inspired individuals to find the right contacts and enrich their world in a made-to-measure way; to  nourish their creativity, interests and artistic passion. 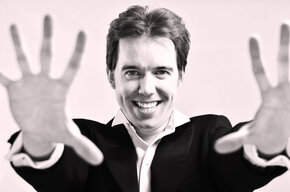