In this workshop we will focus on inclusivity in the context of programming classical music concerts and events. It is known that classical music curation is dominated by male composers of white European descent and within that closed circle, concert programming is increasingly limited to a handful of names and further, only a handful of works. In this discussion we will discuss and uncover:

Uchenna Ngwe is Artistic Director and founder of Decus Ensemble – a chamber group specialisingin music composed for wind and strings - and is also a PhD researcher investigating presentation of the work of historical Black classical musicians in Britain. Her academic explorations into creative practice investigate the lives and work of historical Black classical musicians in Britain from the perspective of a performercurator-activist. She is founder of plainsightSOUND – an online research project uncovering and promoting the work of historical Black classical musicians. In addition to being a busy freelance musician and educator, Uchenna has been a contributor and presenter on BBC Radio 3 and is artistic director of Decus Ensemble – a flexible, mixedinstrumental group dedicated to performing lesser-known and underexplored works for classical chamber ensemble. Born in London, Uchenna studied oboe and cor anglais at Trinity College of Music, and her performances have taken her across Europe, Africa and Asia.

Flutist Eric Lamb is in demand internationally as a concerto soloist, recording artist, recitalist, concert curator and chamber musician. Eric is Lecturer of Flute Performance and Head of Woodwind, Brass and Percussion at the International Academy for Music and Performing Arts in Vienna, Austria. Before this appointment, he held a two-year position as Lecturer of Music at the University of Auckland School of Music in New Zealand where he taught both chamber music and flute. A student of Michel Debost and Kathleen Chastain at Oberlin Conservatory of Music, he completedhis studies at the Hochschule für Musik Frankfurt, Germany with Thaddeus Watson (Orchestral andConcert Soloist Diplomas) and later at the Sculoa di Musica di Fiesole with Chiara Tonelli. Formerly a member of the International Contemporary Ensemble (ICE), he is presently member of both Ensemble Reconsil, Quasars Ensemble and guest principal flutist in orchestras and ensembles throughout Europe. 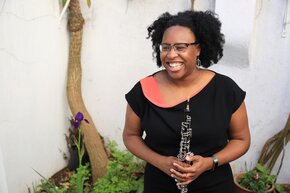