In this remarkable performance, a traditional Japanese Noh Theatre merge with Arnold Schoenberg’s expressionistic masterpiece Pierrot Lunaire (Moonstruck Pierrot)! Musicians of the Music and Arts University of the City of Vienna are performing together with principal artists from Noh Theatre who hold the important intangible cultural property of Japan.
In cooperation with Sion Festival.

About Noh
The origins of Noh can be found in the Sarugaku performances that developed in the Heian period (794-1185) and Kamakura period (1185-1333). Perfected in Japan's Muromachi period (1333-1568), Noh has survived intact the subsequent years of war and social upheaval and is still performed today. Noh created a new theatrical world by fusing three genres: narrative songs called Utai, a form of dance called Mai, and musical accompaniment called Hayashi. With a story containing strong elements of fantasma (Mugen), a richly symbolic performance pared to the barest essentials, a stage stripped to the most basic elements, Noh attains the highest levels of artistic perfection. Added to this, the beauty of the Noh masks and costumes transfixes the eyes of the audience. 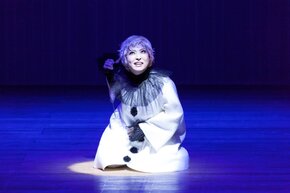