Robert Dick is a musical visionary, a creative virtuoso in the tradition of Paganini and Hendrix, artists who redefined both the music and the technique of their instruments.  Improvisor, composer, author, teacher and inventor, he performs worldwide.  Listening to Dick play solo has been likened to the experience of hearing a full orchestra.

On his musical philosophy: “A central focus of my music is the idea that acoustic instruments can be treated as human-powered synthesizers, each capable of an enormous range of sonority and expression well beyond their traditional definitions.  I have total faith in the ability of humans to transcend limits imposed by presupposition.  As a child, I rejected the idea that the flute could only produce one note at a time and by my late teens had started to invent thousands of new sonorities.  They were there for the doing, if one assumed they could exist instead of couldn’t.

Robert Dick: “The idea of continuous transformation of timbre is very important in my music, which is influenced by electric and electronic music, world music, natural sounds and the work of my fellow composer-performers.  I try never to make pastiches but to fuse inspiration and influences to create work that’s truly original.”

Dick teaches at NYU and the City University of New York Graduate Center.  He maintains an active private teaching studio, including working with flutists the world over using Skype.  Robert Dick’s degrees are from Yale (B.A. and M.M. – composition) and he has received many commissions, grants and prizes for his compositions, including a Guggenheim Fellowship and the Pro Musicis Foundation International Award.  He received the National Flute Association’s Lifetime Achievement Award in 2014. 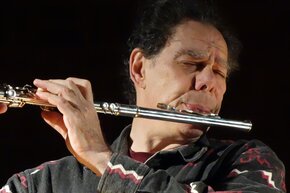