Anto Pett
Anto Pett graduated from the Conservatoire of Tallinn (now renamed Estonian Academy of Music and Theatre) as a pianist and composer. Since 1987 he has been teaching harmony and improvisation at the Estonian Academy of Music and Theatre.
In 1988 he discovered that improvisation was to become his main means of artistic expression. Since 2002 Anto has been a regular professor of contemporary improvisation at the Estonia Academy of Music and Theatre. During his twenty five years of teaching Anto has developed an original improvisation teaching method that works successfully as a teaching process with all instruments and singers. Many of his students have been awarded prizes at the Leipzig Improvisation competition.
Anto has presented his teaching method and presented masterclasses in many Music Schools of Estonia and in several Music Academys and Conservatoires across Europe including Helsinki, Stockholm, Oslo, Haag, Utrecht, Hamburg, Odense, Paris, Bordeaux, Marseille, Riga, Vilnius, Antwerpen, Cardiff, Glasgow, Warsaw, Krakow, Gdansk, Brigthon, Vienna, Evanston and London.
He has directed following improvisation groups: ’Extemporists’ (1994-97) and PROimPRO (1998 – 2002). In 2006 together with his main performing partners, Anne-Liis Poll (voice) and Jaak Sooäär (el. guitar), was established ’Free Tallinn Trio’. This ensemble had their first success in the concert festival ’Christopers’ in Vilnius in 2006. These groups are invited to Festivals of contemporary music, improvisation and modern dance in Estonia, England, France, Finland, Poland, Germany, Sweden and the USA. Anto has also performed in solo improvisation concerts in several European countries. He has also conducted improvisation orchestras in concert (e.g. GIO – Glasgow Improvisation Orchestra, Vienna, Helsinki, Stockholm).
Between 2003 and 2005 Anto recorded 15 CDs together with different improvisation artists on Erol Records, CGA collection (improvized music). 3 CDs with Leo Records 2010 – A Tale – with ’Free Tallinn Trio’, 2012 – PlayWork – duo with Bart van Rosmalen (cello) and 2013 – Northwind Boogy – a piano duo with Christoph Baumann. Among the improvisators whom A.Pett has worked with are: Kent Carter, Sylvain Kassap, Joelle Leandre, Etienne Rolin, Francois Rosse, Emile Biayenda, Albrecht Maurer, Sten Sandell, Petras Visniauskas and Stanislaw Skoczynski. His improvisation teaching method ’A. Pett`s teaching system’ was published in 2007 by edition ’Fuzeau’, www.edidions-classique.com with a CD of exercises.
Anto also has a YouTube music channel for his improvisation work: apett2001

Here are is a comment on the Playwork CD: http://culturecatch.com

Anne-Liis Poll
Anne-Liis Poll is one of the most leading improvisational singers of Estonia. She is also an eminent teacher of singing and improvisation. She has taught singing at the Estonian Institute of Humanities (theatre students), singing and improvisation since 1996 in Drama School of Estonian Academy of Music and Theatre (docent) and since 2001 at the University of Tartu Viljandi Cultural Academy. Anne-Liis Poll is also improvisation pedagogue at Estonian Academy of Music and Theatre.
Anne-Liis Poll started her music studies with accordion in Vasalemma under the guidance of Tiiu Kotkas-Mickfeldt, and piano in Padise with Heino Ridbeck. In 1982, she graduated from the Georg Ots Tallinn Music School as a choral conductor under the guidance of Enn Oja. In 1987, Poll graduated from the Tallinn State Conservatoire with Kuno Areng. In 2003, Anne-Liis Poll defended her thesis "Häälikute mängud" (Games of Sounds, supervisor Alla Vurma) and gained a master's degree. "Häälikute mängud" is also published as a book, which disserts improving of voice technique and improvisation skills. Anne-Liis Poll has also received private guidance in singing with Galina Kulkina, Eva Märtson and Matti Pelo. In 2011, she obtained a PhD with thesis "Häälemängud", (Games of Voice, supervisor Allan Vurma) which also was published as a book.
In 1980–1987, Anne-Liis Poll was a conductor of numerous choirs, such as Female Choir of Tallinn Department Store and Academy of Sciences’ Female Choir. In 1986, Poll founded the Estonian Project Chamber Choir and was the artistic director and conductor of it from 1986 to 1987. With the Estonian Project Chamber Choir Poll won the honorary title of the best conductor and grand prix at international choir competition ’Tallinn 88’. The chamber choir has also released 3 CD-s and a MC. Composer Urmas Sisask has dedicated his work Magnificat to the Estonian Project Chamber Choir choir and it's conductor, also his song cycle Ganymedes is dedicated to Anne-Liis Poll.
In 1987–1988, Poll was the choir master and conductor of the Estonian Philharmonic Chamber Choir. She has cooperated also with Hortus Musicus (1988–1988), baroque orchestra LinnaMuusikud and ensemble väike rinG (1989–1992), Estonian Baroque Soloists (1999–2001), since 2000, with ProImPro and since 2003, with such ensembles as Accentus Tallinn and MederConsort.
Anne-Liis Poll has sung several large-scale forms as J. S. Bach's Magnificat and St. John Passion, G. F. Händel's Messiah and Israel in Egypt, W. A. Mozart's Mass in C-Minor and A. Pärt's Passio. She has also been first performer of solo motets and cantatas by G. Frescobaldi, C. Monteverdi, D. Buxtehude, J. S. Bachi, G. Ph. Telemanni, G. F. Händeli and A. Vivaldi. She has cooperated with well-known improvisation masters such as Anto Pett, Priit Lehto, Jaak Sooäär, Étienne Rolin, Kent Carter, François Rossé and many others, and given recitals both in Estonia and abroad. Since 2000, she has participated at International Improvation Festival in Tartu. As a vocal soloist, she has released 7 CD-s, among them Lieder (1998) and Espressione (1999). In 2004, 4 CD-s of improvisational music were released: Tallinn Walk-in Session, Liberty Plaza Live, OperaKit and Vabalt minna lastud laulud (Songs Set Free). Later cooperation engages Poll with Free Tallinn Trio with pianist Anto Pett and guitarist Jaak Sooäär. 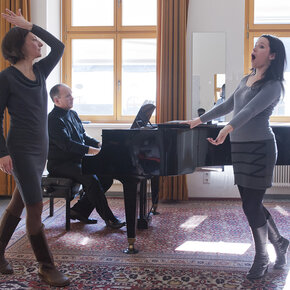