Nacho Gonzáles, guitar
Ignacio González Nappa (1985) is an Uruguayan musician, composer and social entrepreneur. He is the co-founder of U-Lab, a music Lab incubated inside Univision, biggest Hispanic TV network. Ignacio studied Jazz Composition and Performance at Berklee College of Music.
Ignacio is the recipient of the Wayne Shorter Award from Berklee College of Music, biggest recognition in Jazz Composition. His music has been performed and recorded by Terence Blanchard, John Patitucci, George Garzone, Hugo Fattoruso and Ruben Rada among others. He is also the recipient of the Jazz Education Network Award, one of the highest distinctions on Jazz Composition in the US. The Grammy nominated Manhattan School of Music Latin Jazz Orchestra has premiered his works at Dizzy Gillespie Coca Cola Jazz Club New York and in Nov 2016 will do a special concert featuring his recent compositions.
Before Berklee, González was co-founder and Chief of International Operations at SociaLab the first spin off of Un Techo para mi País1. SociaLab2 is an Innovation Center supporting entrepreneurs and companies wanting to develop products and services for the bottom of the pyramid (low income consumers). And he was also the co-­founder and Chief Executive Officer of Un Techo para mi País in the U.S. Under his leadership, TECHO raised over USD 8 million, benefiting thousands of families, and developing an enormous network with some of the most influential businessman and entrepreneurs in the region.
González studied Communications in the Universidad de Montevideo. He won a Fulbright scholarship for Latin American Leaders, and continued his studies in Amherst College, Massachusetts. He did an Executive Leadership Program in the Thunderbird School of Global Management, and was named in the “TOP 20 under 40” by PODER Magazine. He is also a journalist at El Observador (music and literature critic). Ignacio composed music for short films, and in 2016 won the Jazz Education Network Award for Young Composers, in Louisville
Kentucky.

Martin Ibarburu, drums
Martín Ibarburu is considered one of the best drummers in Latin America. He started to study drums at the age of 16 with Osvaldo Fattoruso, then Gustavo Etchenique and Nicolás Arnicho. He studied also classical drumming at the Escuela Universitaria de Música of Montevideo.
In 1993 he joined the band of Jaime Roos, with whom he toured in the World Soccer Cup Korea-Japan 2002 representing Uruguay. In 1994 he formed and released two records with his band Pepe González, Faros (1995) and Febrero (1998). In 1995 he recorded in LA with Juana Molina her album Rara, with the artistic production of G. Santaolalla.
In 2007 and 2010 he was one of the main players in „Montevideo Drumfest”.
He has been steady member and recorded with the bands of: Jorge Drexler, Lito Vitale, Ruben Rada, Hiram Bullock, Fito Páez, Ana Prada, Martí Buscaglia, Luis Salinas, Diane Denoir, Luciano Supervielle, Adriana Varela, among others. 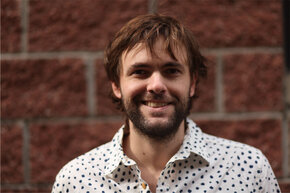