Prof. Ventseslav Nikolov is one of Bulgaria's most interesting and significant musicians - violloncellist and conductor, chamber music professor at the Music Akademy in Sofia. Student of M. Rostropovitch and Janos Starker, he used to be also Starker's assistant.during the International Music festival in Varna (Bulgaria). In his fourty years concert activity he had performed over 1500 concerts in Germany, Italy, USA, Switzerland, Greece, Kuba, Mexico and Eastern Europe - Bulgaria, Czechoslowakia, Poland, Hungary, late USSR, Romania. His repertoire includes more then 400 works from early classics to contemporary music. He has made over 200 studio records on plates and CDs. Among them are all Beethoven's Sonatas and Variations, the 6 cello-suites and the Gamba sonatas from J.S.Bach, Concerts from Dvorak, Schostakovitsch, Haydn C dur and D dur, R. Strauss' Don Quixote, Tshaikovski's Rokoko-Variations, Brahms' Double concert, Honegger, Bloch Rapsody "Schelomo" etc. He participated in many international music festivals and made many master courses for cello and chamber music in USA, Germany, Italy etc. He has worked with numerous contemporary composers and there are over 40 works written and dedicated to Ventseslav Nikolov. Ventseslav Nikolov is playing on a violoncello made by Matteo Goffriller (Venice) in 1726.

The Bulgarian violoncellist Ventseslav Nikolov is liked for his precise performances. He lives on the stage in his own musical world. (M. Rostropovitch, PRAVDA 1970)

I find Mr. Ventseslav Nikolov to be an excellent cellist and musician. His experiences as a performer and teacher place him in the front rank of his contemporaries. (Janos Starker) 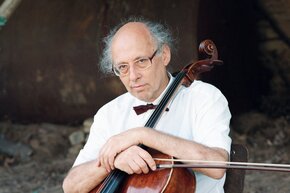