Tomasz Golinski (1986) is a Polish composer, marimbist, percussionist, producer and music engraver, living in vienna. In 2011 he graduated Master of Percussion at the Gdansk Music Academy with Professor Miroslaw Adrjanczyk and at the Royal Conservatory of Music in Antwerp, Master of Marimba with Professor Ludwig Albert. Tomasz finished both schools with greatest distinction. Moreover, in the Royal Conservatory he obtained the title of the best student of the year. In 2013 he graduated at the Leuven University College of Arts, Postgraduate Marimba solo with Professor Ludwig Albert and in 2014 he graduated Master of chamber music at the same university. Both specializations, Tomasz finished with greatest distinction.
As a composer, Tomasz started his education in 2009 at the Royal Conservatory of Music in Antwerp, specialization in electro acoustic music with Joris de Laet. In 2013 he graduated the department of Composition at the Leuven University College of Arts in the class of Luc van Hove.
Tomasz Golinski is the laureate of several percussion and composition international competitions including the First prize of the Universal Marimba Composition Competition under the patronage of H.M. Queen Paola in 2011 and 2012 with his marimba solo pieces Luminosity and Purity, Second prize in the marimba solo category of the 8th Percussive Arts Society Italy International Percussion Competition, Fermo in 2010, Second prize at the 39th Percussive Arts Society Percussion Composition Contest 2011 in the USA with the marimba solo piece The Absurd World, Prize winner of the Fidelio Chamber Music Competition 2015 in Vienna. His compositions Purity II and Luminosity has been published by the Danish publishing house Edition Svitzer and The Absurd World, by Keyboard Percussion Music in the USA.
Tomasz received the scholarship from the Polish Ministry of Culture and National Heritage and in 2012 the scholarship from “Ministerie van de Vlaamse Gemeenschap” in Belgium. In the same year he has been awarded by the President of Koszalin City (Poand) – Piotr Jedlinski for his outstanding artistic achievements.
It is worth to mention that in 2013 Luminosity was used as a set-piece in the Universal Marimba Competition and from this moment his marimba compositions are included in several international competitions and are performed worldwide. The world premiere of his Double Percussion Concerto No. 1 for two multi percussionists was held during the international festival Festival de Musica Contemporanea de Tenerife in June 2015 in Spain and performed by Tuopali Duo where he also gave a lecture at the conference about his piece. 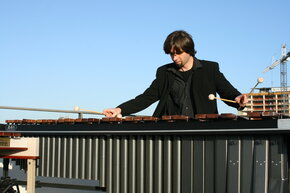