In a bid to reconnect with a longstanding tradition, Patrick Ayrton offers a hands-on practical course based on methods of Baroque improvisation. The workshop focuses on the recognition and identification of schemata, forms and stylistic figures typical of the 17th and 18th centuries. These are then put into practice through imitation and assimilation processes. Similarly to the study of jazz, students experiment with building-blocks allowing the construction of creative strategies. Historic methods and sources are discussed. Interactivity plays a main role, as participants are encouraged to suggest ways of enhancing each others inventions and gestures. Areas covered: free fantasies, toccatas, preludes, dance forms, fugues, air and variations, etc. Vocalists & instrumentalists of all sorts are welcome!

Patrick Ayrton divides his time between performance on a variety of keyboards and his work as a conductor. He was born in London in 1961 but spent most of his childhood in Switzerland. Patrick studied organ and sacred music at the Vienna Academy where he took lessons with Alfred Mitterhofer and attended masterclasses given by Michael Radulescu. Later, he moved to The Netherlands where followed courses in harpsichord and chamber music under the guidance of Ton Koopman. He was a laureate of the Organ Competitions at Innsbruck in 1983 and Bruges in 1985. Patrick Ayrton teaches thorough-bass, chamber music and improvisation at the Royal Conservatory of the Hague. He has been a tutor for the European Union Baroque Orchestra and has given courses in performance at the Tchaikovsky Conservatory and Gnessin School in Moscow, the Yonsei University of Seoul, the Latvian Academy in Riga and the Summer School of the Salzburg Mozarteum. In 1996, Patrick Ayrton played the title rôle in Anne Cuneo’s documentary film ‘Francis Tregian, Gentleman and Musician’. His association and collaboration with the Dutch conductor Arie van Beek led him to explore and develop his skills as a music director. In recent years, orchestras of repute have invited him to conduct projects, including the Orchestra of the Auvergne, the Chamber Academy of Potsdam, the Dijon Bourgogne Orchestra, the Pasdeloup Orchestra in Paris and the Chamber Orchestra of Munich. Patrick is also the founder of the Les Inventions, an ensemble which explores uncharted repertoire from the past (such as the works of Joseph Touchemoulin and Thomas Linley Jr.) Les Inventions work in close partnership with acclaimed British vocal ensemble VOCES8. Patrick Ayrton is also known for his pre-concert talks and is a regular lecturer for the APM (Association Progrès du Management) in France. 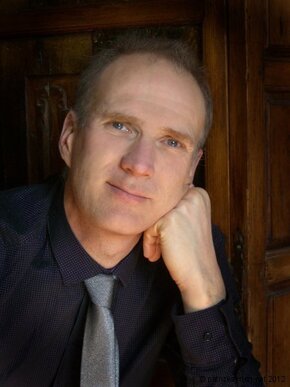